What are Polychlorinated Biphenyls (PCB)?

Polychlorinated Biphenyls or PCBs are a family of 209 chemical compounds (congeners) consisting of two benzene rings and 1 to 10 chlorine atoms. They are organochlorinated substances of very high chemical stability, low flammability, and resistant to thermal degradation. 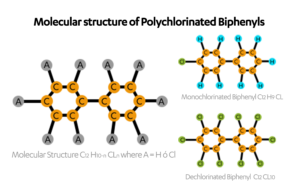 Due to these characteristics, they were widely used in industrial applications such as sealants, inks, carbon paper, paint additives, and in particular, refrigerants and lubricants in closed electrical equipment, such as electrical transformers and capacitors.

It should be clarified that there are no natural sources of PCBs; these are man-made synthetic compounds. Polychlorinated Biphenyls started to be produced in 1930, the main commercial brands being: Arochlor, Inerteen (USA), Clophen (Germany), Pyralène (France), Apirolio (Italy), Sovol (Russia).
From 1970 onwards, the impact of PCBs on the environment began to be of concern, mainly because of their high persistence, which led to a change in technology and the replacement of these compounds. Producing countries such as the United States, Japan, Germany, France and the United Kingdom prohibited their manufacture and began to strictly regulate their use, handling, storage and final disposal for electrical applications.

Although in the literature they are generically referred to as PCBs, for the management and treatment of these chemical compounds it is essential to know the concentration in the different matrices (liquids, solids). Therefore, we call “pure PCB” or “Askarel” any fluid with a concentration of more than 40% of PCB congeners (i.e. more than 400,000 ppm). Many transformers with dielectric oil or silicone fluid contain PCBs due to cross-contamination. This means that they were not manufactured with pure PCB fluids and were accidentally contaminated.

HOW DO THEY PRESENT THEMSELVES?

The physical state of PCBs depends on the amount of chlorine atoms present; they can be a viscous, yellowish liquid or a solid, resin-like state and have no odour. In commercial mixtures used in electrical equipment, a characteristic odour can be perceived, which is due to the presence of other chlorinated substances such as trichlorobenzene. In the case that PCBs are found as contaminants in dielectric mineral oils, these will not present differences with the matrix that contains them and can only be identified through a specific analysis.

WHAT ARE THE IMPACTS ON THE ENVIRONMENT AND HUMAN HEALTH?

PCBs have great disadvantages: they are not biodegradable, are very persistent in the environment and bioaccumulate in fatty tissues.

PCBs can be transported in the air as small particles and deposited far from their place of generation. They are not soluble in water but the suspended particles are adsorbed in the sediments at the bottom of rivers, lakes and seas. When ingested by microorganisms and fish, they accumulate in their fatty tissues and can reach man through the food chain.

Similarly, without proper management and treatment, at temperatures between 250ºC and 750ºC they can produce highly toxic compounds such as dioxins and furans. 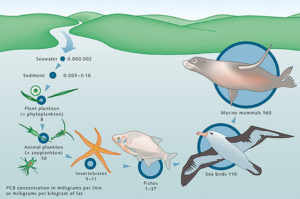 These and other reasons are what prompted the Stockholm Convention to ban the production and disposal of PCBs.