At Trédi Argentina, when we speak of our specialty in the management of hazardous waste, there is a recurring question about the “export of hazardous waste”: is the waste actually sent abroad for destruction, or is it dumped in the middle of the sea?

In the collective imagination, there is the idea that there is no control in the transboundary movement of waste that has no treatment in the country. To break this “myth”, Trédi Argentina we consulted a specialist in the subject, Dr. Leila Devia. 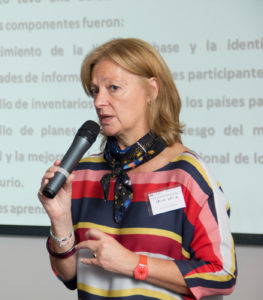 1- Trédi Argentina: Doctor, what are the international regulations that control transboundary movements of hazardous waste?

Dr. Leila Devia: The Basel Convention on the Control of Transboundary Movements and Disposal of Hazardous Wastes and Other Wastes, adopted in 1989 and in force in 1992, arose in response to concerns and worries about the behavior of some companies from developed countries that were dumping hazardous wastes in developing countries. In Argentina, the Convention came into force with the enactment of Law 23,922.

The Basel Convention is a Multilateral Agreement on the Environment through which 188 countries (up to date) within the United Nations system agreed to protect the environment and human health from the harmful effects caused by the generation, management, transboundary movements, and disposal of hazardous waste and other waste.

2- TARG: What were the reasons that led the countries to address this issue?

Dr. LD: Transboundary transport of hazardous waste attracted public attention in the 1980s.  Some ships sailing from port to port trying to unload their toxic cargoes made headlines around the world.  These incidents were largely motivated by the imposition of stricter environmental regulations in industrialized countries.  As disposal costs increased, some generators of toxic waste began shipping hazardous waste to Africa, Eastern Europe and other regions.  Once on the ground, such waste was dumped indiscriminately, accidentally spilled, or improperly managed, resulting in very serious environmental problems.

3- TARG: What is a “transboundary movement” of waste?

“State of Export” means any Party from which a transboundary movement of hazardous or other wastes is planned or initiated.

“Transit State” means any State, other than the State of export or of the State of import, through which a movement of hazardous or other wastes is planned or takes place.

5- TARG: Can you explain to us what the most important points of the Basel Convention are?

Dr. LD: The Objectives of the Convention are:

6- TARG: In your experience, why do you think there is a myth about the lack of control over waste exports?

Dr. LD: The control exists but due to irregular situations, the social perception is that it is not rigorous. There is a need to raise awareness and sensitivity to these issues and to strengthen the effectiveness and efficiency of these controls.