WHAT ARE THE EFFECTS OF PCB ON HUMAN HEALTH?

Four decades after banning their manufacture and restricting their use, PCBs remain a concern for human health and the environment. Two mass poisonings caused by the consumption of PCB-contaminated rice oil in Yusho (1) (Japan, 1968) and Yu-Cheng (Taiwan, 1979) alerted the world to the dangers of these chemicals. The International Agency for Research on Cancer (2) (IARC) considers that there is sufficient evidence to classify PCBs as human carcinogens (3).

Laboratory studies have shown that the effects of PCBs on human health are: chloracne, liver damage, alterations in the immune and endocrine systems, hyperpigmentation of the nails and skin, among other pathologies. 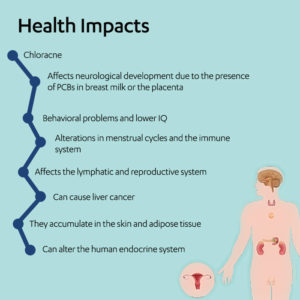 PCBs enter the body orally or through the digestive tract, by inhalation and through the skin. According to the type of exposure that people have to PCBs, we can classify it into occupational and environmental exposure. The exposure at work today is minimal, due to the existence of specific regulations to control and restrict the use of these substances. At Trédi Argentina, the workers involved in the handling of PCBs use the appropriate personal protection elements (4) and are constantly trained according to the standards of the Séché Environnement Group.

As for environmental exposure, the main route of entry into the human body is through the intake of PCB-contaminated food, especially through the consumption of bioaccumulated (5) fish. In the water, PCBs are ingested by microorganisms and fish, which in turn constitute food for other animals, and can thus reach humans through the food chain.

There are numerous studies on the presence of PCBs in breast milk and on the effects on children born to exposed mothers, especially in places where these chemicals were used, such as the Great Lakes region in the United States (6).

The greatest danger posed by PCBs is the generation of extremely toxic by-products such as dioxins and furans. Dioxins can be produced by incomplete combustion of PCBs in the case of transformer fires or by the use of contaminated oils as alternative fuels. Like PCBs, dioxins are known to belong to the so-called “dirty dozen”: a group of hazardous chemical compounds that are part of the persistent organic pollutants (POPs) included in the Stockholm Convention.

[1] M. Kuratsume. Investigation of the cause of the “Strange Disease”. YushoBook./ M.Nishizumi. Toxicity of PCBs, PCDFs and related compounds. Yusho Book

[2] International Agency for Research on Cancer

[3] IARC Monographs on the Evaluation on Carcinogenic Risks in Humans, Volume 107, 2016